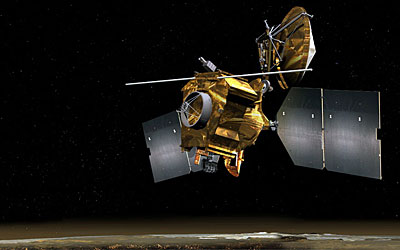 The mission was launched from Cape Canaveral in August 2005 and the two BAE Systems RAD750 microprocessors on board the spacecraft helped steer it on its 310 million-mile journey.

The single-board computers also will control the satellite's maneuvers to shrink the orbit and, later, help collect and transmit information between Mars surface missions and Earth.

NASA's orbiter will examine the atmosphere, surface and subsurface of Mars. Researchers hope to learn more about the history and distribution of water on the planet.

BAE Systems has provided radiation-hardened solutions for U.S. space programs for twenty years. Its RAD6000 computers are installed on each of the still-broadcasting Mars Exploration Rovers, launched in 2003. The only control and data computers aboard the two Rovers, they continue to help execute that exploration.

The RAD750 represents the next generation of space microprocessors and were vital in NASA's Deep Impact mission. NASA is investigating future options for the Deep Impact flyby spacecraft, which is on a trajectory to fly past Earth in December 2007.