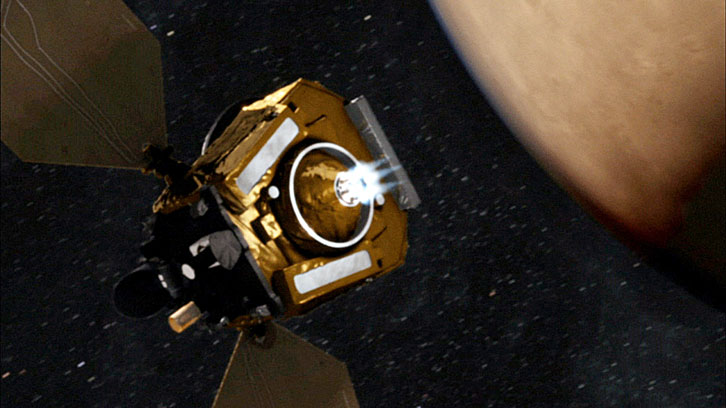 The Mars Reconnaissance Orbiter spacecraft, designed and built by Lockheed Martin for the National Aeronautics and Space Administration (NASA) and the Jet Propulsion Laboratory (JPL), was successfully placed in orbit around Mars. The spacecraft's flight and operations in space are controlled by teams at JPL in Pasadena, and Lockheed Martin Space Systems Company operations near Denver.

"This is a monumental achievement for NASA JPL and the space community," said Lockheed's Jim Crocker. "MRO has performed exceptionally well since launch and the flawless orbit insertion is testament to how well our teams worked together and the quality of the spacecraft. Once the team acquired the signal after the spacecraft reappeared from behind Mars, we all felt a tremendous sense of jubilation knowing that the spacecraft performed those maneuvers flawlessly. NASA and JPL now have another healthy satellite in orbit around Mars."

On March 7, final commands were sent to the spacecraft to ready it for orbit insertion. On March 10, those commands fired the six main engines for a 27-minute burn that slowed the spacecraft, allowed it to be captured by Mars' gravity, and placed it into an elliptical polar orbit around Mars that is initially 35.5 hours long.

During the next six months, the flight team will put MRO through a series of aerobraking maneuvers -- dipping the spacecraft into the upper Martian atmosphere -- to slow it even further and tighten its highly elliptical orbit to a final circular orbit. MRO is scheduled to begin its primary mission in November 2006. Using its suite of six instruments, it will perform scientific reconnaissance of the planet's surface, delivering data five times greater than all previous Mars missions, providing global maps of the planet and its climate, looking for future landing sites, and enabling communications support and data relay for missions planned for 2007 and beyond.