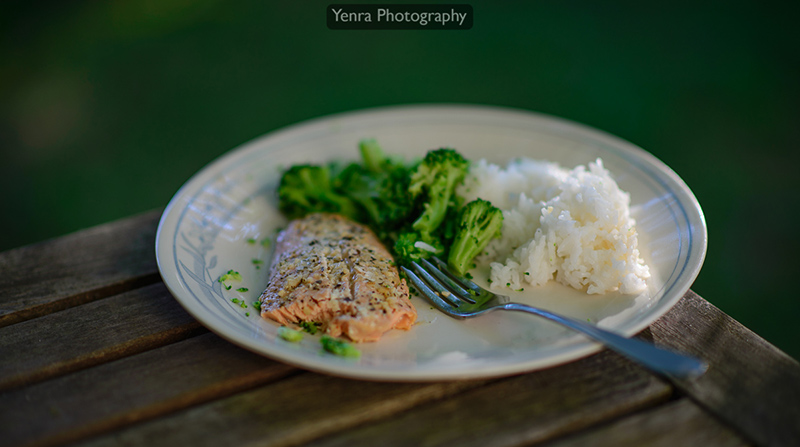 Eyesight benefits of salmon, tuna, and mackerel Eating oily fish once a week may reduce age-related macular degeneration (AMD) which is the major cause of blindness and poor vision in adults in western countries and the third cause of global blindness, according to a study published August 8, 2008 in the American Journal of Clinical Nutrition. There are two types of AMD, wet and dry. Of the two, wet AMD is the main cause of vision loss. A team of researchers across seven European countries and co-ordinated by the London School of Hygiene and Tropical Medicine sought to investigate the association between fish intake and omega 3 fatty acids with wet AMD, comparing people with wet AMD with controls. Participants were interviewed about their dietary habits including how much fish they ate and what type. Information on the main omega 3 fatty acids (docosahexaenoicacid (DHA) and eicosapentaenoic acid (EPA) was obtained by linking dietary data with food composition tables. The findings show that people who habitually consume oily fish at least once a week compared with less than once a week are 50% less likely to have wet AMD. There was no benefit from consumption of non oily white fish. There was a strong inverse association between levels of DHA and EPA and wet AMD. People in the top 25% of DHA and EPA levels (300 mg per day and above) were 70% less likely to have wet AMD. Professor Astrid Fletche explained: "This is the first study in Europeans to show a beneficial association on wet AMD from the consumption of oily fish and is consistent with results from studies in the USA and Australia. Two 3oz servings a week of oily fish, such as salmon, tuna or mackerel, provides about 500 mg of DHA and EPA per day".