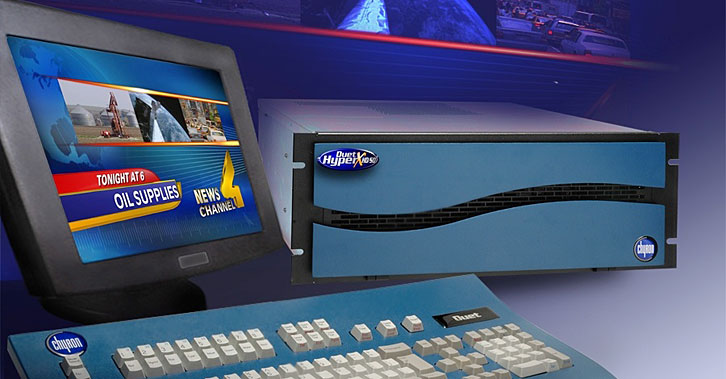 "The seven HyperX units we just purchased are primarily aboard our HD trucks so that when the conversion is made by our customer base, we'll be able to easily upgrade the machines," said NMT's Frank Coll.

According to Coll, the ability of the HyperX to easily switch from SD to HD and back again was a key selling point.

As the flagship product in Chyron's Duet Family of CGs, the Duet HyperX HD/SD features HD/SD-switchable channels and powerful 3D creation and animation capabilities. The system's speed combined with an easy-to use graphics interface for producing stunning graphics is the reason that the Duet HyperX is fast becoming the CG of choice for demanding studio and mobile live broadcast and production operations.

"It's rapidly becoming the graphics generator du jour, so to speak," says Coll. "Both ESPN and FOX Sports are using the Duet HyperX for all their events. In our case, we were upgrading from our older units."

Coll explained that Chyron's high level of customer and product support was also paramount in their purchase decision. "Chyron has been really good about providing training to our engineers on use of the product. And, their customer service, in terms of getting someone on the phone and talking about a problem has been very good. In addition, much of the software and updates for the HyperX are all readily available so any field engineer with an Internet connection can download software and address any operational issues relatively easily."

Coll said that confidence in Chyron as a company that has made graphics a singular focus is perhaps the most important, especially in the broadcast industry.

"Chyron has a long legacy of serving the broadcast industry and their products continue to evolve," added Coll. "As a company, they're committed to building graphics devices that the industry wants and today they're one of the few companies totally focused on graphics. Chyron understands television and they understand the importance of graphics in television."