Four No Game No Life cosplays by the water at Otakon 2015 – we went down to the harbor as the night started to cool the air. I like the way the bokeh in the distance reflects against the water’s surface, becoming even wavier. It was wonderful to be with these cosplayer friends as they made me feel I was in the world of the show. We used found ambient light and also brought in our own LED sources. It’s good to have the white light of LED as a counterbalance to the colors one gets from lamp-post lighting.

4Shiro by the water

Shiro, bokeh reflection. Shiro excels at calculations and logic. This is a look out into the distance, as if dreaming within a dream. These pictures were shot with a Nikon D600 and a Nikkor 85mm 1.4G lens.

3Sora by the water

In the cool of the evening at Otakon

Sora, bokeh reflection. Sora is an eighteen-year-old who excels at strategies. Together with his sister Shiro, they can win at anything. Illumination in these pictures was done with an LED light panel and very open F  stop (1.4) with film sensitivity above 800.

2Stephanie Dola by the water

Bokeh streaming across the surface of the water.

Stephanie Dola, bokeh reflection. Stephanie is a teenage girl and granddaughter to the previous king of Elkia, the nation inhabited by humans. She counts on the help of Sora and Shiro, who sometimes play tricks on her. But she is a good sport.

1Jibril by the water

Free in our world

Jibril is a flügel, a powerful angelic race in No Game No Life. Even though she is six thousand years old, she is the youngest and most powerful of her species. After losing to Sora and Shiro in a game of Shiritori, she becomes their slave, but is treated as an equal, actually very much a friend. She loves knowledge. 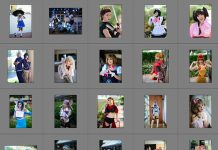 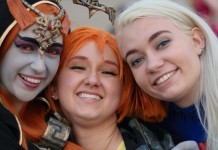 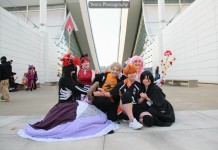