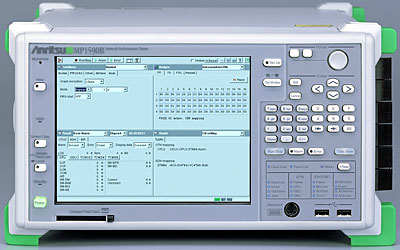 With the convergence of IP networks and optical/digital transmission, EoS technology for sending LAN-based Ethernet over WAN-based SONET/SDH is one of the most important next generation network technologies. For this reason, Anritsu has enhanced the VCAT and LCAS options on its MP1590B EoS unit.

The EoS units are compatible with GFP, LEX, LAPS (X.86), PPP, and other encapsulation methods. Detailed EoS frame data can be checked in real time using over 120 real-time counters as well as Ethernet frame and GFP frame capture and decode functions. Development of VCAT and LCAS options compliant with ITU-T standards has made it possible to measure a broad variety of EoS transmission circuits. Finally, a VCDD option enabling evaluation of a device's ability to absorb the full range of allowable differential delay variations has been developed. A single MP1590B Network Performance Tester can perform efficient evaluation of EoS-compatible networks, transmission devices, and modules based on ITU-T standards.

An XFP module has an optical interface on the transmission-circuit side and an electric differential interface called XFI on the equipment side. Both interfaces must be used when assessing characteristics of the module. However, because no measuring instruments conforming to XFI had been available until now, precise measurement of jitter that was degrading circuit performance was impossible because noise generated inside the XFP module or improper matching conditions with the instruments influenced the measurements.

For further verification, an MP1590B optical interface can be installed simultaneously, optical and digital signals can be output simultaneously, and both the electrical output level and electrical input level judgment threshold values can be changed.