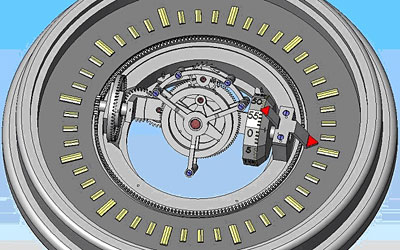 Progress Watch Corporation has developed a watch movement that complements the Triple Tourbillon Movement announced in August. The company has coined the name STAR for the new see-through triple axes rotary tourbillon movement.

The company continues to develop innovative precision watch technology. STAR features a movement with a single, three axes rotary tourbillon, indicating time directly from the tourbillon's position, without the need for additional hands.

The tourbillon mechanism completes a full rotation around the outer frame every 12 or 24 hours, depending on design. The inner dial indicates minute and makes a full rotation every 60 minutes while moving with the entire mechanism along the outer circle. Seconds can be indicated directly on the movement's centerpiece.

The double pointer simultaneously indicates the hour on the outer dial and the minutes on the inner dial, without the need for hands. Removing the need for hands allows the entire mechanism to be viewable from both sides, creating the first see-through tourbillon watch.

This new technology creates an all-new market segment for tourbillon-based watches by allowing manufacturers to design additional attractive and exclusive designs based on the see-through rotary triple axis movement. This includes the potential for a design that features a watch that can be read from either side. The design and technology allows for creative individualization of tourbillon-based watches.

In this new three-axis tourbillon movements, the balance swings around two additional axes, eliminating virtually all inaccuracies due to the movement's relative position to the earth and the effects of gravity. Progress Watch's movements represent the ultimate in mechanical watch movements delivering unparalleled accuracy. The problems of instability and sensitivity are dramatically reduced in these new designs, making the STAR tourbillon movements less prone to damage.