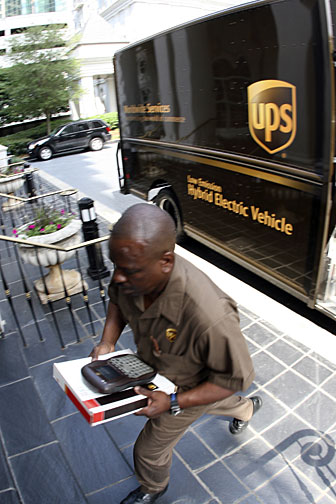 The hybrid electric vehicles (HEVs) will join 20,000 low-emission and alternative-fuel vehicles already in use.

The new HEV package cars are expected to reduce fuel consumption by roughly 44,000 gallons over the course of a year. The hybrids also should reduce by 457 metric tons the amount of CO2 gases released annually into the atmosphere.

The new hybrid power system allows UPS to use a smaller diesel engine than would be required in a conventional delivery truck, thus saving on fuel and pollution-causing emissions. A battery pack, motor/generator, and power control system allow electric power to be fed into the powertrain.

The hybrid electric vehicles use regenerative braking, whereby energy generated when stopping the moving vehicle is captured and returned to the battery system as electrical energy.

The external truck bodies will be the same as the company's other signature brown trucks. The trucks will operate with lithium ion batteries, which offer a faster re-charging capability and last longer than batteries used in previous generations of HEVs. Additionally, these vehicles are much quieter.