On October 12, 2017, Cinnabon announced that its Crafted by Cinnabon line will be regularly added to the bakery cases of RaceTrac’s TX and FL locations. Cinnabon will debut a limited-time-offer Frosting Filled Pumpkin Muffin Top to its exclusive line-up at RaceTrac, which already includes a decadent Crafted by Cinnabon Frosting Filled Long John Doughnut. This expanded offering comes in time to celebrate the two Atlanta-based, industry leaders one year in partnership together.

Participating RaceTrac locations will continue to offer the Frosting Filled Long John Doughnut and Gooey Swirls as year-round offerings and will rotate in new limited-time-offer products as the seasons change. These products will be exclusive to RaceTrac in the convenience channel, across the four states they are located. 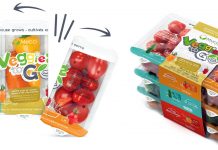