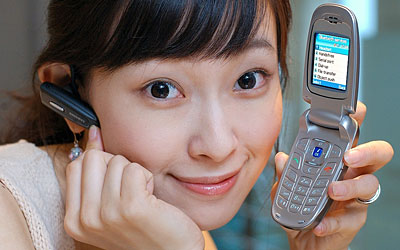 Samsung announced that it has released the SGH-E620 Bluetooth voice recognition phone into the European market, which can make calls using one's voice via a Bluetooth headset.

This product exhibits the state-of-the-art technology that places a call to the person whose name has been stated into the Bluetooth headset, by automatically searching the phone book of the mobile phone.

The Bluetooth voice recognition phone is much easier to use than existing gadgets which need to be placed close to the user's mouth and its capacity for voice recognition has been greatly enhanced. Furthermore, calls can be made with the mobile phone left untouched inside a user's bag or pocket, making it even more convenient.

In addition to the Bluetooth functionality, the phone has a refined antenna design and comes equipped with a 1-megapixel camera, video wallpaper, silver nano anti-bacterial coating, speaker phone, and 64 polyphonic ringtones.

A particularly eye-catching feature is the video wallpaper, which displays moving pictures for 10-30 seconds every time the mobile phone is switched over to stand-by mode. Another notable aspect to the handset is that it is the first product released in the European market that has adopted silver nano anti-bacterial coating.

"Samsung Electronics is planning to expand the range of languages supported by the Bluetooth voice recognition technology, that is, to cover Chinese and Russian, and certainly Korean for release into the Korean market," said Samsung.

Bluetooth functionality is gaining popularity because it is easy to use and allows fast, short-distance wireless telecommunication. Using a wireless headset, one can listen to music, exchange files amongst notebooks and other mobile phones, play games, and print out pictures stored on the phone.