Researchers at University of California, Los Angeles (UCLA) have demonstrated that black tea may promote weight loss and other health benefits by changing bacteria in the gut. In a study of mice, the scientists showed that black tea alters energy metabolism in the liver by changing gut metabolites. The study found that both black and green tea changed the ratio of intestinal bacteria in the animals: The percentage of bacteria associated with obesity decreased, while bacteria associated with lean body mass increased.

Newly Discovered: Black tea, through a specific mechanism through the gut microbiome, may also contribute to good health and weight loss in humans.

How Good for Gut: Previous studies indicated that chemicals in green tea called polyphenols are absorbed and alter the energy metabolism in the liver. The new findings show that black tea polyphenols, which are too large to be absorbed in the small intestine, stimulate the growth of gut bacterium and the formation of short-chain fatty acids, a type of bacterial metabolites that has been shown to alter the energy metabolism in the liver.

Conclusion: Both green and black teas are prebiotics, substances that induce the growth of good microorganisms that contribute to a person’s well-being. The molecules in green tea are smaller and can more readily be absorbed into the body and reach the liver directly, while black tea molecules are larger and stay in the intestine rather than being absorbed. When black tea molecules stay in the intestinal tract, they enhance the growth of beneficial bacteria and the formation of microbial metabolites involved in the regulation of energy metabolism. The findings suggest that the health benefits of both green tea and black tea go beyond their antioxidant benefits, and that both teas have a strong impact on the gut microbiome.

About Black Tea in General: Black tea is a type of tea that is more oxidized than oolong, green and white teas. Black tea is generally stronger in flavor than the less oxidized teas. All four types are made from leaves of the shrub (or small tree) Camellia sinensis. Two principal varieties of the species are used – the small-leaved Chinese variety plant (C. sinensis subsp. sinensis), used for most other types of teas, and the large-leaved Assamese plant (C. sinensis subsp. assamica), which was traditionally mainly used for black tea, although in recent years some green and white have been produced. While green tea usually loses its flavor within a year, black tea retains its flavour for several years. For this reason, it has long been an article of trade, and compressed bricks of black tea even served as a form of de facto currency in Mongolia, Tibet and Siberia into the 19th century. Although green tea has recently seen a revival due to its purported health benefits, black tea still accounts for over ninety percent of all tea sold in the West. 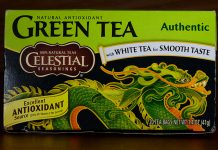