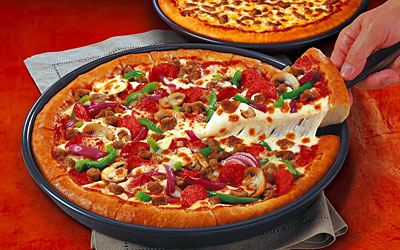 In 1980, the very first Pizza Hut Pan Pizza was pulled out of the oven, which has continued to be America's favorite Pan Pizza for a quarter of a century.

To mark the occasion, Pizza Hut is offering its medium, one topping Pan Pizza for twenty-fiv cents with the purchase of a large specialty pizza at menu price. Pan Pizza fans agree that it's the flavorful thick crust, which is golden brown, crispy on the outside and soft and chewy on the inside, that makes Pan Pizza a top seller. And it is not surprising that cheese and pepperoni have continued to be America's favorite toppings on the Pan Pizza for the last twenty-five years.

"Our Pan Pizza has become an American dinnertime icon," said Tom James of Pizza Hut. "What better way to let families enjoy more of their favorite thick-crust pizza, than to make it available for only a quarter as our way of saying thanks."

Based on an average of Pizza Hut brand sales, Pizza Hut sold nearly 168 million Pan Pizzas in 2004. If placed side by side, the pizza path would exceed the circumference of the Earth.