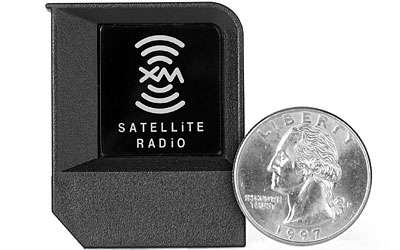 XM Satellite Radio and Audiovox have unveiled the XM Passport, a tiny, portable tuner that delivers XM Satellite Radio to an expanding portfolio of XM Ready products for the home, car, and portable use utilizing XM Connect and Play technology.

An XM subscriber can easily move the XM Passport from one product to another, allowing the subscriber to receive XM Satellite Radio on many devices with only one subscription. The XM Passport is a standard platform that is completely inter-operable among XM Ready systems. XM Passport sets a new standard for satellite radio technology in terms of the ease of use and affordability, delivering an unmatched simplicity in customer experience.

"The XM Passport is a tiny little tuner that is going to make a big impact on satellite radio," said Dan Murphy of XM. "Millions of home, car, and portable products will use the XM Passport as the gateway to XM Satellite Radio. It's a passport to the whole world of music, sports, talk, and entertainment choices available on XM. This is a major breakthrough for XM in terms of offering customers portability, affordability, and convenience."

The XM Passport will come bundled with Samsung NEXUS XM/MP3 digital audio players and connect to the home docking station and car dock. The user can carry the one XM Passport between home and car docks for live reception of XM's signal in both environments.

The XM Passport delivers XM to a variety of XM Ready home audio systems that use XM Connect and Play technology.

"The XM Passport is a whole new audio format, in the same way that CDs and MP3s are audio formats," Murphy added. "You can take a CD from the stereo to the car, or take an MP3 file from the computer to the portable player. With the XM Passport, you can take XM from one product to the next to listen. It goes wherever you go."