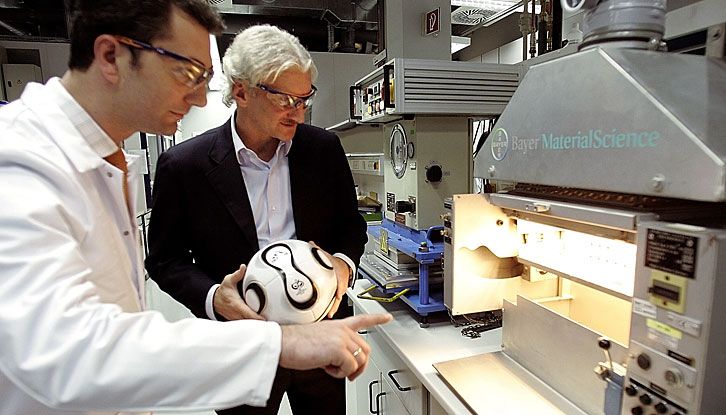 The challenge facing Adidas and Bayer MaterialScience in developing the soccer ball for the FIFA World Cup 2006 in Germany is daunting. The aim of the project was to make what is, by definition, a round soccer ball even rounder and even better for the biggest sports event in the world in 2006. What has come out of it all, after a long period of intensive joint development work, is a high-tech product that answers to the name Teamgeist.

The word translates into English as Team Spirit, and could equally be applied to the many years of outstanding cooperation between Adidas and Bayer. "We developed the first all-synthetic ball together for the World Cup in Mexico in 1986. Since then, we have produced a new model for every World Cup and European Championships," explains Thomas Michaelis of Bayer MaterialScience. "We spent three years working on this black, white and yellow ball. They were three years of outstanding teamwork, involving many other companies throughout the world." Materials research, design and production took place simultaneously on several continents.

At the beginning of the project, Adidas drew up a clear list of detailed and demanding specifications. Michaelis explained: "With every new ball, Adidas tells us exactly what it wants in terms of design and performance. This time the aim was to make the ball even rounder and to maintain its attractive appearance over a long time." But how round is round?"

Round is relative. The Teamgeist is just one percent away from being a perfect sphere. This makes it particularly accurate as it travels through the air. It is all down to the materials used to make it and the innovative construction. For the first time, the Adidas specialists have thrown out the familiar five and six-sided sections to which we have been accustomed over the last few decades and replaced them with propeller-shaped panels. They have also reduced the total number of sections from 32 to 14. Fewer edges and more roundness also means fewer seams and corners in the outer skin so that when the players kick the ball, there is a greater chance that they will make contact with a smooth surface. This increases their chances of hitting the target.

The keep the ball in shape, Bayer's coating specialists developed a new structure for the outer skin. To begin with, they increased the wall thickness of the ball to 1.1 millimeters to make it rounder and smoother. They also used their experience in shoe development. In the end, they decided to use four different layers of material placed one on top of the other. The decisive component in ensuring an accurate trajectory of the Teamgeist is the polyurethane-based syntactic foam, which is applied to an adhesive layer that bonds the outer skin to the textile substrate. The foam consists of millions of gas-filled microspheres. "This ensures that the ball quickly returns to its original round shape after becoming deformed when kicked, and it is this that gives it an optimum trajectory," says Thomas Michaelis. Above the foam layer, the ball has an aliphatic intermediate coat to protect it from external influences such as moisture, and give it exceptional elasticity.

Finally, the ball's outer finish protects the printed surface from abrasion. It makes for greater durability and gives it a perfect appearance over a long period. The Teamgeist still gleams like new when the teams leave the pitch exhausted and filthy after a hard match. The material, which is also frequently used as a surface layer in the fashion industry, comes from Bayer MaterialScience's Impranil range. In addition to this, Teamgeist is no longer stitched but bonded with a patented thermal adhesive coat. The result is that, even in heavy rain, the ball gains scarcely any weight (at most 0.1 %). This soccer ball is virtually water-impermeable.

"It's incredible how much development and material research has gone into it. I always thought you just pumped air into the ball and that was that," said Rudi Voeller, Sporting Director of Bayer 04 Leverkusen. He was quite amazed when he visited the research and development laboratory at Bayer's plant in Leverkusen to take a closer look. Soccer icon David Beckham captain of the England team, is also impressed: "The ball goes exactly where you want it to go." German international, Bernd Schneider, endorsed Beckham's comment: "With this ball you can put in perfect crosses for your forwards. And for me as free-kick specialist, it means I can curl the ball round the wall with amazing accuracy."