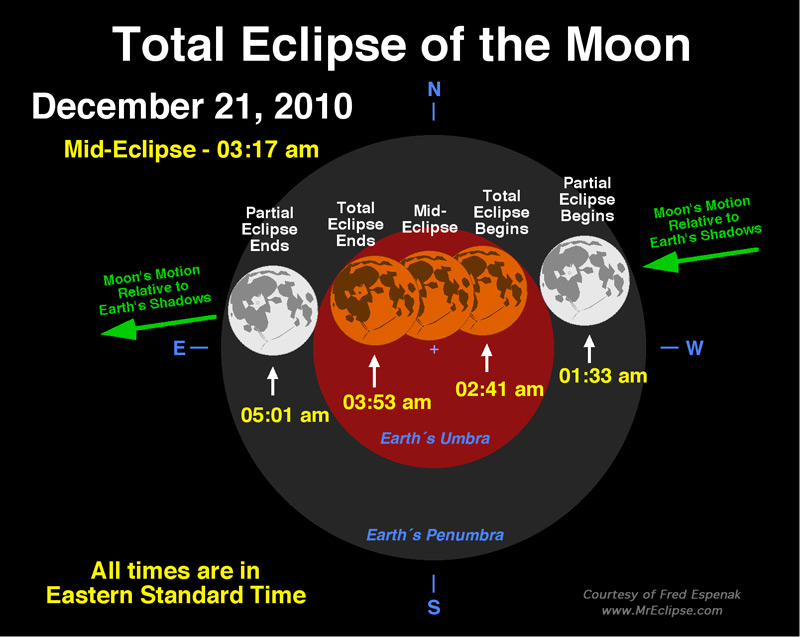 Early in the morning on December 21, 2010, a total lunar eclipse will be visible to sky watchers across North America (for observers in western states the eclipse begins late in the evening of December 20), Greenland and Iceland. Viewers in Western Europe will be able to see the beginning stages of the eclipse before moonset, and in western Asia the later stages of the eclipse will be visible after moonrise. From beginning to end, the eclipse will last about three hours and twenty-eight minutes. For observers on the east coast of the U.S. the eclipse lasts from 1:33am EST through 5:01 a.m. EST. Viewers on the west coast will be able to tune in a bit earlier. For them the eclipse begins at 10:33 p.m. PST on December 20 and lasts until 2:01am PST on Dec. 21. Totality, the time when Earth's shadow completely covers the moon, will last 72 minutes.

Because the eclipse falls on this year's winter solstice, the moon will appear very high in the night sky, as the solstice marks the time when the Earth's axial tilt is farthest away from the sun. A lunar eclipse occurs when the Earth lines up directly between the sun and the moon, blocking the sun's rays and casting a shadow on the moon. As the moon moves deeper and deeper into the Earth's shadow, the moon changes color before your very eyes, turning from gray to an orange or deep shade of red. The moon takes on this new color because indirect sunlight is still able to pass through Earth's atmosphere and cast a glow on the moon. Our atmosphere filters out most of the blue colored light, leaving the red and orange hues that we see during a lunar eclipse. Extra particles in the atmosphere, from say a recent volcanic eruption, will cause the moon to appear a darker shade of red.