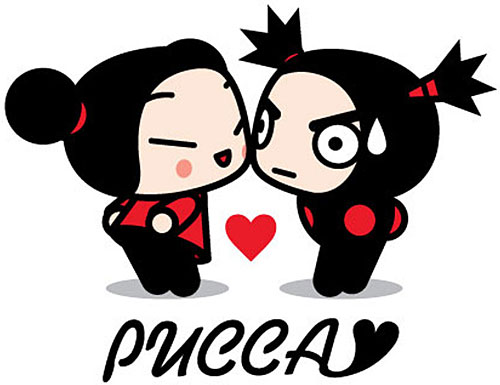 On February 10, 2010, Warner Brothers and Vooz announced the launch of a specialized apparel collection for the U.S. featuring Pucca, the international character from South Korea who has gained wild popularity in Europe and Asia. Originally introduced online, Pucca debuted as a series of Flash-animated shorts produced by Vooz and quickly became a true cultural phenomenon. Known for its silent comedy factor, Pucca creates humor with almost no spoken words mixed with a strong universal theme of love. Pucca is the story of an independent and self-confident girl who is the daughter of a restaurant owner in Korea. In the animated shorts, Pucca is spunky and spirited; and she is in love with Garu, a young warrior. Pucca's dedicated online following led to its introduction in Europe & U.S. The stylish Curve boutiques in Soho, New York City and Los Angeles will be the site of celebrity-hosted launch parties geared towards fashion-forward, contemporary 18-29 year old guests. Curve owner Nevena Borissova, was instrumental in selecting designers for the introduction, who include: Preen; Mark Fast; Raquel Allegra; Unconditional; Not Rational; Genetic Denim; I.R.O. and jewelry by Erickson Beamon. "The designers have interpreted Pucca's character and strong red and black colors into their designs in addition to the bounding hearts that seem to always surround her," Borissova added. "Mixed with the unique approach each designer took to Pucca's message, the pieces are comprised of attractive, hip and wearable garments with a twist." Curve will showcase the Pucca designs exclusively throughout the spring.