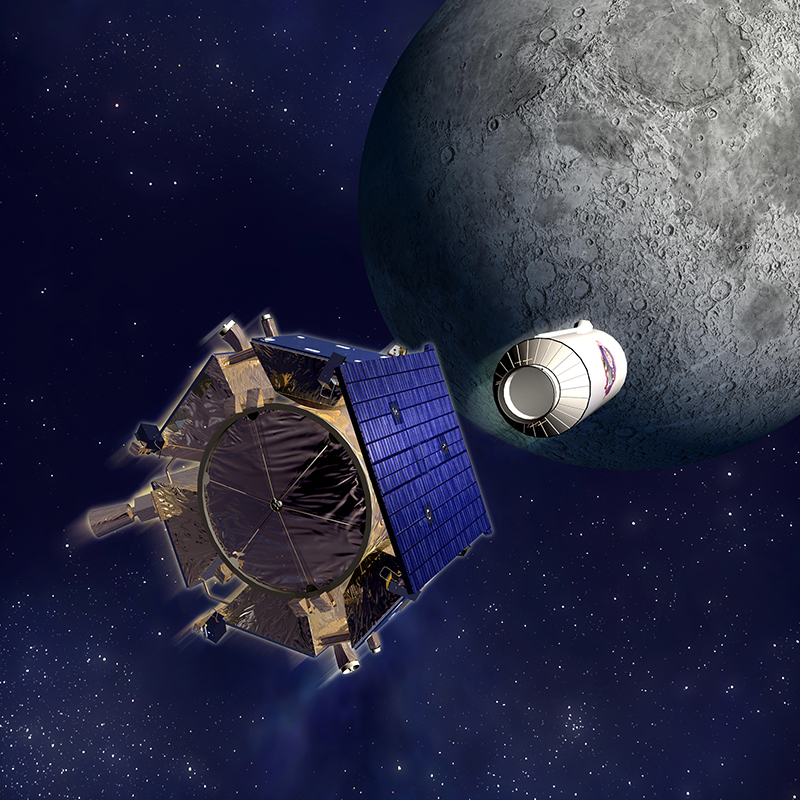 On November 13, 2009, NASA announced that its Lunar Crater Observation and Sensing Satellite (LCROSS) mission successfully uncovered water in a permanently shadowed lunar crater. The LCROSS spacecraft and a companion rocket stage made twin impacts in the Cabeus crater on October 9, 2009 that created a plume of material from the bottom of a crater that has not seen sunlight in billions of years. The plume traveled at a high angle beyond the rim of Cabeus and into sunlight, while an additional curtain of debris was ejected more laterally. Scientists long have speculated about the source of significant quantities of hydrogen that have been observed at the lunar poles. The LCROSS findings are shedding new light on the question with the discovery of water, which could be more widespread and in greater quantity than previously suspected. If the water that was formed or deposited is billions of years old, these polar cold traps could hold a key to the history and evolution of the solar system, much as an ice core sample taken on Earth reveals ancient data. In addition, water and other compounds represent potential resources that could sustain future lunar exploration. Since the impacts, the LCROSS science team has been analyzing the huge amount of data the spacecraft collected. The team concentrated on data from the satellite's spectrometers, which provide the most definitive information about the presence of water. A spectrometer helps identify the composition of materials by examining light they emit or absorb. The team took the known near-infrared spectral signatures of water and other materials and compared them to the impact spectra the LCROSS near infrared spectrometer collected.

Additional confirmation came from an emission in the ultraviolet spectrum that was attributed to hydroxyl, one product from the break-up of water by sunlight. When atoms and molecules are excited, they release energy at specific wavelengths that can be detected by the spectrometers. A similar process is used in neon signs. When electrified, a specific gas will produce a distinct color. Just after impact, the LCROSS ultraviolet visible spectrometer detected hydroxyl signatures that are consistent with a water vapor cloud in sunlight. Data from the other LCROSS instruments are being analyzed for additional clues about the state and distribution of the material at the impact site. The LCROSS science team and colleagues are poring over the data to understand the entire impact event, from flash to crater. The goal is to understand the distribution of all materials within the soil at the impact site. LCROSS was launched June 18, 2009 from NASA's Kennedy Space Center in Florida as a companion mission to the Lunar Reconnaissance Orbiter, or LRO. Moving at a speed of more than 1.5 miles per second, the spent upper stage of its launch vehicle hit the lunar surface shortly after 4:31 a.m. PDT October 9, creating an impact that instruments aboard LCROSS observed for approximately four minutes. LCROSS then impacted the surface at approximately 4:36 a.m. LRO observed the impact and continues to pass over the site to give the LCROSS team additional insight into the mechanics of the impact and its resulting craters. The LCROSS science team is working closely with scientists from LRO and other observatories that viewed the impact to analyze and understand the full scope of the LCROSS data.