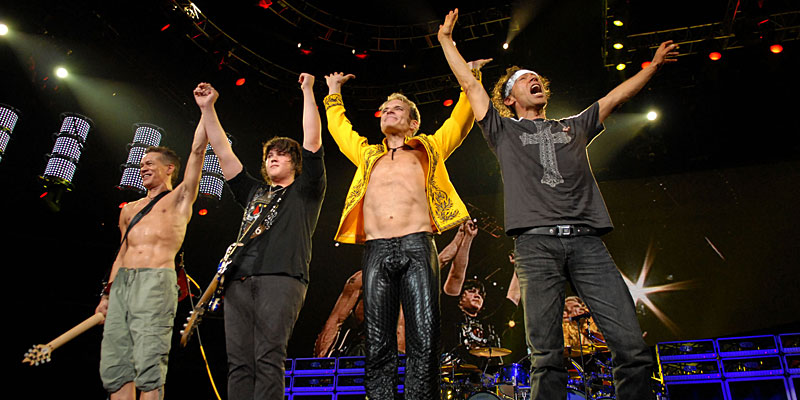 Guitar Hero Van Halen hit retail shelves nationwide on December 22, 2009, delivering players a unique way to experience the energy, attitude and music from one the most accomplished bands in the world. With twenty-five of Van Halen's greatest hits from Jump to Panama and three of Eddie Van Halen's most epic guitar solos, coupled with rockin' anthems from a host of globally renowned artists spanning various genres of music - including Lenny Kravitz, Weezer, Foreigner, Queen and Blink-182 - the set list crafted for Guitar Hero Van Halen is the perfect blend of music for all fans and players. Guitar Hero Van Halen allows gamers to share in the social and expressive Guitar Hero experience. Virtual rock stars can jam together regardless of physical location in the online Quickplay mode, compete head-to-head in Face-Off, Pro Face-Off, Battle and eight-player Battle of the Bands game modes plus create, record, edit and share their own unique compositions in the Music Studio.

Guitar Hero Van Halen brings to life the virtuosity and unadulterated fun that has made Van Halen one of the most successful and popular rock and roll acts of the past 30 years. Along with 19 larger than life musical artists, including Queens of the Stone Age, Weezer, The Offspring, Blink-182 and Queen, guitar legend Eddie Van Halen, famous frontman David Lee Roth, dynamic drummer Alex Van Halen and skilled bassist, Wolfgang Van Halen, give fans the chance to own the stage and put on show-stopping performances in the coolest, all-new venues from around the world. Available now in the United States and in Europe on February 19, 2010, Guitar Hero Van Halen is developed by Underground Development for the Xbox 360 video game and entertainment system from Microsoft, the PlayStation3 and PlayStation2 computer entertainment systems and the Wii system from Nintendo.