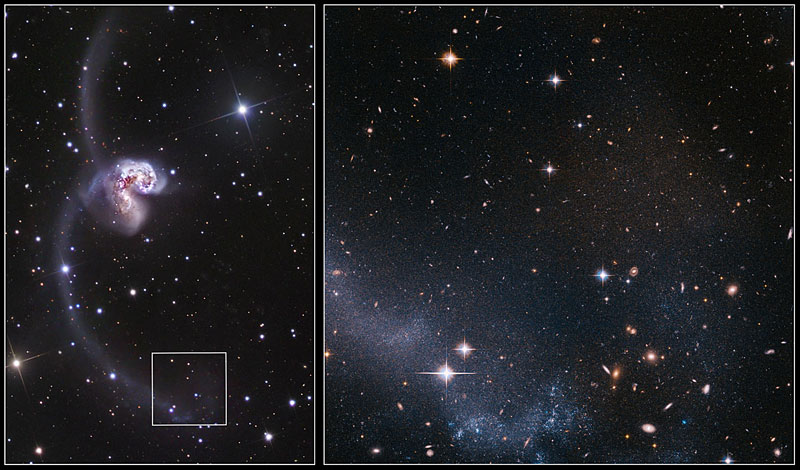 The Antennae Galaxies are named for the two long tails of stars, gas and dust that resemble the antennae of an insect. These “antennae” are a physical result of the collision between the two galaxies. Studying their properties gives us a preview of what may happen when our Milky Way galaxy collides with the neighboring Andromeda galaxy in several billion years. Although galaxy mergers today are not common, it is believed that in the past they were an important channel of galaxy evolution. Therefore understanding the physics of galaxy mergers is a very important task for astrophysicists. The Antennae are located in the constellation of Corvus, the Crow. The Antennae Galaxies are among the closest known merging galaxies. The two galaxies, also known as NGC 4038 and NGC 4039, began interacting a few hundred million years ago, creating one of the most impressive sights in the night sky.

They are considered by scientists as the archetypal merging galaxy system and are used as a standard against which to validate theories about galaxy evolution. Announced May 9, 2008, an international group of scientists led by Ivo Saviane from the European Southern Observatory has used Hubble’s Advanced Camera for Surveys and Wide Field Planetary Camera 2 to observe individual stars spawned by the colossal cosmic collision in the Antennae Galaxies. They reached an interesting and surprising conclusion. By measuring the colors and brightnesses of red giant stars in the system, the scientists found that the Antennae Galaxies are much closer than previously thought: 45 million light-years instead of the previous best estimate of 65 million light-years.