Dr. Wolfgang Bernhard unveiled the new Eos in front of nearly a thousand media people. Under a myriad of flashes, Dr. Bernhard drove on stage and opened the convertible roof to huge applause. The world premiere of the Eos was staged in a specially created sunflower field at the Volkswagen booth.

"The Eos is both a real convertible and a real coupe, a balance between price and performance." Dr. Bernhard also announced a continuation of this year's products, saying that by 2009, Volkswagen will bring five to ten entirely new models on the market.

The Eos chassis concept was developed as its own independent convertible coupe. 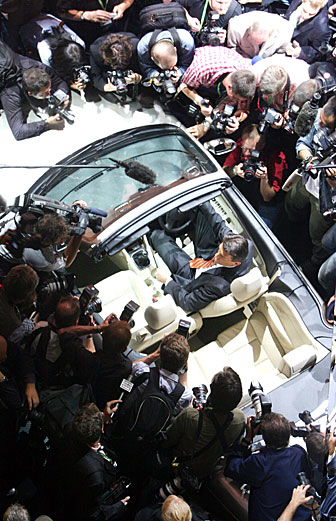 Technologies such as power train range (115 to 250 horsepower) and the chassis are based on the Passat.