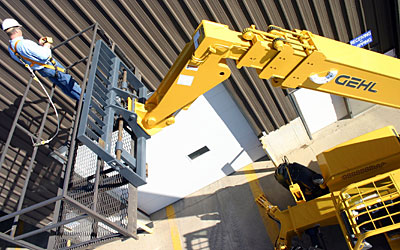 Gehl Company has developed a radio remote control system that allows a telescopic handler operator to control boom functions using a compact, wireless remote control pendant from outside the cab, or from within a personnel work platform. The hand-held pendant can be used to raise, lower, extend and retract the boom, and start and stop the engine.

"Our goal was to add a new dimension of functionality to the machine without overburdening it with cost or complexity. By combining the radio remote with the safety features found in our existing, easy-to-operate PWP system, we believe we have accomplished that goal," explained Engineer Manager Merrick Monaghan.

This remote control system is a major enhancement to our Gehl exclusive Personnel Work Platform System, explained John Koepf of Gehl. "This is a revolutionary, time-saving option, especially for roofing and construction contractors. The Radio Remote Control System allows contractors to be more productive, by not requiring the operator to remain in the cab. It can be useful for anyone who needs to precisely maneuver materials to different elevations," Koepf said.

The pendant/transmitter is waterproof and resistant to impacts encountered on jobsites. The solid-state unit has a proportional trigger control for controlling the speed of the boom.

The system uses Frequency-Hopping, Spread-Spectrum (FHSS) technology, which was initially developed for military applications. FHSS devices concentrate their signal power into a narrow band, which randomly hops from frequency to frequency within a designated radio band to prevent signal errors. Each transmitter uses a programmable, unique ID code to ensure that no two systems will conflict at a job site. Its radio transmission pattern, along with its error-checking techniques, enables its signal to overcome the interference that commonly affects licensed radios. 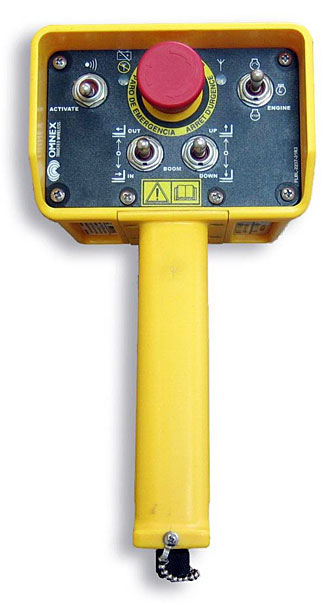 "The Radio Remote Control System has already generated a strong interest from users during prototype and field testing," said Koepf.

The system adds a new level of versatility to telescopic handlers. It directly addresses the need for more productivity and at approximately one-third the cost of the option from the few competitors that offer a remote control. It gives contractors extra value by allowing them to engage in a greater variety of job applications with a single machine.

The Radio Remote Control System is now available on all Gehl DL Series telescopic handlers, and will soon be available on Gehl RS Series models. In addition, Gehl is developing a 90-degree swing carriage for use in conjunction with the Radio Remote Control System. This carriage will allow users to position a work platform exactly parallel to a building, or to position their telescopic handler parallel to a building.