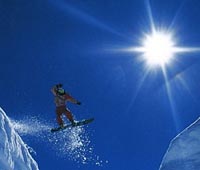 Snow sports shoppers are willing to spend their money on snow sports equipment, apparel and accessories even when the overall economy is significantly down. August to October snow sports sales of $507 million were up 9% overall bolstered by very strong sales of carryover equipment and gear for juniors. "Snow sports shoppers went out looking for bargains and they were willing to buy when they found them," said Kelly Davis, Director of Research for SnowSports Industries America (SIA), the not-for-profit industry trade group represents manufacturers and distributors of snow sports products.

August to October 2008 retail sales in the snow sports industry were driven by pre-season clearance sales. Sales of carryover gear accounted for a significant portion of the observed increases in snow sports equipment sales. Sales like the "SkiBonkers" sale in Seattle, which are dominated by leftover inventory from the past season, help consumers find bargains on carryover items. Carryover is officially defined as any item that sells for less than the average retail cost for that item. Carryover accounted for 28% of skis, 23% of snowboards, 24% of ski boots, and 26% of snowboard boots sold August to October 2008. Compare that to last season's August to October results when carryover sales accounted for just 16% of skis and 19% of snowboards sold and millions fewer dollars spent.