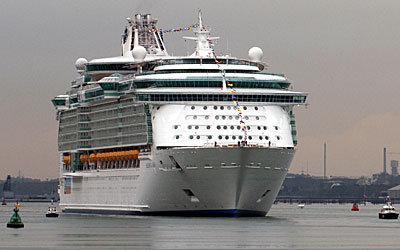 Freedom of the Seas, the world's largest and most innovative cruise ship, left England today to make her transatlantic voyage to New York where she will make her American debut on May 10. Having already caused quite a stir in Europe, the ship is set to make her mark on the United States, where she will introduce a shipboard surf park, cantilevered whirlpools suspended 112 feet above the ocean, a full-size boxing ring, and a fourteen-person family suite.

The general public can catch a glimpse of Freedom of the Seas during the entire month of May as she makes her way up and down the East Coast making stops at Cape Liberty Cruise Port in Bayonne, NJ; Pier 92 at Manhattan's West side in New York; Warehouse Berths 6 and 7 in Boston; and, finally, the Port of Miami.

May 10 - Big Ship in Big Apple : Freedom of the Seas sails into New York Harbor at 8 a.m. and then docks at Cape Liberty Cruise Port until the evening of Thursday, May 11.

May 12 - Showtime : Freedom of the Seas makes her national debut live on NBC's Today show while anchored off of the Statue of Liberty for the three-hour broadcast. The ship will return to Cape Liberty Cruise Port and then dock in the afternoon in Manhattan.

May 13 - New York, New York : The general public can head to Manhattan until 4 p.m. to get a close-up look at Freedom.

May 15 - 17 - Preview Sailings : Freedom of the Seas remains docked at Cape Liberty Cruise Port, where she will make a series of one- and two-night sailings before departing for Boston on Thursday, May 18

May 19 - 22 - Beantown Blitz: Freedom of the Seas arrives in Boston on Friday, May 19, where she will be docked at Warehouse Berths 6 and 7 before departing for Miami on Monday, May 22.

May 25 - June 3 : Home at Last: Freedom of the Seas arrives at the Port of Miami, where she will make a series of short sailings until June 4, when she will begin her regular sailing schedule of seven-night Western Caribbean itineraries from Miami.

Royal Caribbean has twenty ships in service and three under construction.