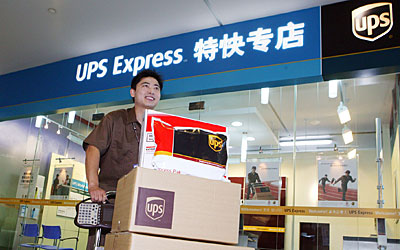 Two UPS Express retail centers have opened in Shanghai, China, the first retail endeavor launched by the company in China.

The centers are located in key central business districts of Shanghai, one in the Shanghai Stock Exchange building and the other in the Shanghai Mart Convention Center. Both are owned and operated by UPS and offer extended operating hours to attract nearby businesses.

The launch of the UPS Express centers is the latest in a series of strategic initiatives to expand UPS's operations and brand presence in China. In 2005, the company took direct control of its operations, serving more than 330 cities in China, which represent 85 percent of the country's international trade activity. UPS also expanded its air operations in China throughout 2006 and now flies to more points in China than any other U.S. airline, freight or passenger. The company has 4000 Chinese employees.