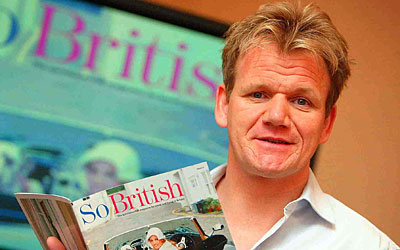 Famous chef and television personality Gordon Ramsay will open his first restaurant in the United States, Gordon Ramsay at The London, in New York City at The London NYC Hotel. The restaurant will offer intimate modern French dining similar to its London counterpart, Restaurant Gordon Ramsay on Royal Hospital Road in Chelsea. The bar and more casual area of the restaurant will be based on Ramsay's exciting Maze restaurant on Grosvenor Square in London featuring a daily offering of market specials and a variety of tasting dishes that encourage guests to construct their own menus in a relaxed and informal environment.

Ramsay's culinary career began when he joined Marco Pierre White at Harvey's in Wandsworth, England, followed by additional training in the kitchens of Joel Robuchon and Guy Savoy in France. In 1993, Ramsay became the chef at London's Aubergine. Since then he has opened ten restaurants worldwide.

The New York restaurant will combine classic British style with Manhattan vivacity. Decorated in shades of emerald, diners will find privacy offered by richly detailed timber panels, Gordon Ramsay at The London will seat forty-five guests. The more casual area and bar offer seating for eighty and blends patchwork leather furniture in shades of blue and green. Guests can enjoy breakfast, lunch, dinner, cocktails and tea service beneath a suede lined ceiling in this warm and inviting room.

The kitchen will feature a private chef's table, something that Gordon is famed for in London. Here guests can enjoy the atmosphere and excitement of the kitchen while dining in luxury.

The London NYC is a a 564 room hotel located at 151 West 54th Street between Sixth and Seventh Avenues.