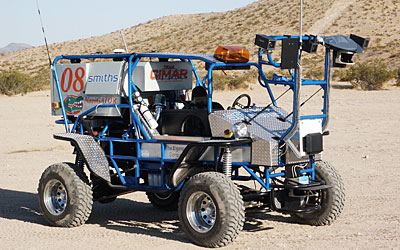 Engineers from Smiths Aerospace and the University of Florida's Center for Intelligent Machines and Robotics (CIMAR) have developed a fully robotic and cost-efficient car that today begins competing in qualification rounds for the DARPA Grand Challenge.

In the endurance race across the Mojave Desert, unmanned, fully autonomous ground vehicles must drive themselves 175 miles through challenging terrain and natural and man-made obstacles. The team whose vehicle finishes the designated route most quickly and within a ten-hour timeframe wins two million dollars.

Smiths is participating in the contest to further develop the navigational technologies it currently provides on manned vehicle platforms.

"We believe that accurate, autonomous navigation and robotic technologies are vital to the future success of civil and military transport," said John Alber of Smiths.

Smiths is approaching the navigational challenges of the DARPA Grand Challenge differently than its competitors. Smiths has opted for a low cost inertial navigation system integrated with a precision GPS receiver suited for navigating desert terrain, yet is a fraction of the cost of ring laser-based systems.

Team CIMAR was selected as one of only 43 semifinalists out of 200 teams to continue qualification rounds for the final Grand Challenge race.

"After dedicating thousands of hours to building and testing a new robot for this year's contest, we are confident Team CIMAR is a formidable competitor in this year's contest," said Dave Armstrong of Team CIMAR. "Smiths Aerospace's North Finding Module is the heart of the NaviGATOR vehicle and provides the critical advantage to completing the course. The team is thrilled to have made it this far and is grateful for the generous support and guidance we've received from Smiths Aerospace."