For secrets to longer life, scientists have turned to worms.

Announced October 13, 2017, investigators at Case Western Reserve University School of Medicine and University Hospitals Health System have identified a new molecular pathway that controls lifespan and healthspan in worms and mammals. In a Nature Communications study published today, researchers showed that worms with excess levels of certain proteins lived longer and healthier than normal worms. In addition, mice with excess levels of these proteins demonstrated a delay in blood vessel dysfunction associated with aging. The study has major implications for our understanding of aging and age-associated disorders.

In molecular genetics, the Krüppel-like family of transcription factors (KLFs) are a set of zinc finger DNA-binding proteins that regulate gene expression.

“We find that by artificially increasing or decreasing the levels of a family of proteins called Kruppel-like transcription factors (KLF), we can actually get these small worms (Caenorhabditis elegans) to live for longer or shorter time periods,” said first author Nelson Hsieh, MD/PhD fellow at Case Western Reserve University School of Medicine. “Since this same family of proteins also exists in mammals, what is really exciting is that our data suggests the KLFs also have similar effects on aging in mammals, too.”

Upon further investigation, the researchers discovered that KLF proteins work by controlling autophagy–a recycling process cells use to clear debris, like misfolded proteins or normal molecular byproducts that build up in old age. Loss of this quality control mechanism is a hallmark of aging.

“As cells age, their ability to perform these functions declines,” say the authors. “This likely leads to an unsustainable accumulation of toxic protein aggregates, which ultimately present an obstacle to cellular survival.” Worms without KLF proteins cannot maintain autophagy and die early.

According to the researchers, the next step will be to study the precise mechanisms underlying how autophagy in cells lining blood vessels contributes to improved blood vessel function. They will also seek strategies to target KLF proteins in humans. 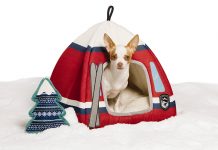