The 2007 Porsche 911 Turbo combines the latest evolution of variable-geometry turbochargers and automatic transmissions to produce stunning standing-start acceleration figures. Equipped with the newly updated and optional 5-speed Tiptronic S automatic transmission, the all-wheel-drive 911 Turbo will accelerate from a standing start to 60 mph in only 3.4 seconds. This is 0.3 seconds quicker than a 911 Turbo equipped with the standard 6-speed manual transmission. The impressive performance is due to close integration of the variable turbine geometry (VTG) system, the updated Tiptronic S transmission, and the new electronically controlled all-wheel- drive system.

Porsche's variable turbine geometry (VTG) setup on the 2007 911 Turbo was developed in close cooperation with Borg Warner Turbo Systems, and is based on technology which has been widely and successfully applied to diesel engines since the early 1990s. It is nearly identical in concept to other turbo manufacturers' variable nozzle/geometry compressors, including a system that was briefly used on a series gasoline production engine in the late 1980s. This application encountered difficulties due to high operating temperatures -- a problem not easily solved with contemporary materials -- and production was stopped after a limited run.

After nearly two decades, aerospace-grade materials have allowed the progression of variable-geometry turbo technology to the point that it can now reliably operate in the higher-temperature environment of turbocharged gasoline engines. Porsche's version of variable turbine geometry in the 2007 911 Turbo incorporates these latest material applications, plus a sophisticated control algorithm. The combination produces the advantages of both small and large turbochargers, generating a much wider plateau of torque and providing quicker response compared to the previous generation 911 Turbo, while providing the reliability of fixed-vane turbochargers. 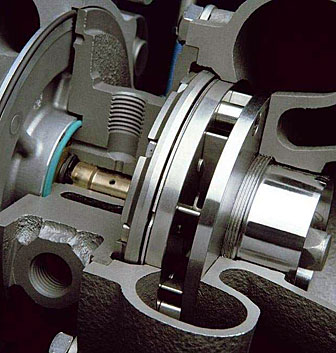 Improvements to the Tiptronic S transmission in the latest 911 Turbo contribute to the performance gains by allowing an earlier ramp-up of boost pressure when brake-torquing the transmission, and new tuning lets more torque accumulate while the brake pedal is held. Other improvements reduce the time required for the transmission to react to driver inputs, and produce quicker shifts.

If launched appropriately, a 911 Turbo equipped with Tiptronic S is essentially pre-tensioned at the starting line, and during acceleration runs, power-interruptions are reduced in comparison to the 6-speed manual transmission. Aiding acceleration, when paired with Tiptronic S, the all- wheel-drive system with PTM can deliver a nearly uninterrupted flow of torque to all four wheels.

In terms of providing performance, the Tiptronic S transmission has made the prodigious abilities of the 911 Turbo more accessible to a wider range of customers. In its evolution, the Tiptronic S now provides certain areas of strength in relation to the 6-speed manual, particularly in standing start acceleration numbers, an area of quantified performance that grows more challenging as peak horsepower levels continue to escalate.