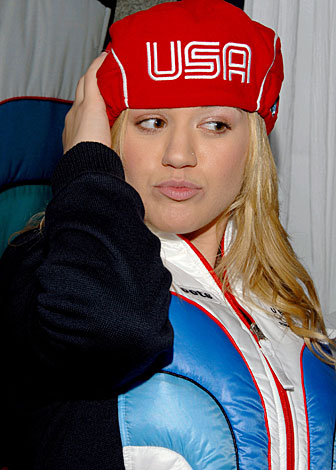 This morning, NBC's Today Show announced live from Torino that the Roots Team USA beret was voted the trendiest Olympic item at the 2006 Winter Games. Standing outside in downtown Torino, host Katie Couric modeled the beret as she said that Roots won the Today Show's online survey by a landslide, taking 58%. As she spoke on camera, dozens of smiling spectators behind her were also wearing the beret. Competing against the Roots beret was the Nike bobsled T-shirt and the Heidi hat ski hat. Nike came in second place.

NBC initiated the survey when the Today Show showed the various Olympic items on their program. Viewers were invited to vote online for what they thought would be the next hot article in Olympic apparel.

Celebrity performers and presenters -- including Kelly Clarkson, Mariah Carey, and Jennifer Love Hewitt -- stopped by the Roots stand, many posing for photographers as they wore their new Roots beret.

At the 2002 Winter Olympics in Salt Lake City, a million Roots Team USA Berets were sold.