We are all familiar with AM and FM radio – and understand that wireless services of other kinds, including Wi-Fi, use radio waves. Different bandwidths of the radio frequency spectrum are being used to create new applications. The W band of the microwave part of the electromagnetic spectrum ranges from 75 to 110 GHz, wavelength ≈2.7–4 mm. It sits above the U.S. IEEE-designated V band (50–75 GHz) in frequency, and overlaps the NATO designated M band (60–100 GHz). The W band is used for satellite communications, millimeter-wave radar research, military radar targeting and tracking applications, and some non-military applications.

On June 5, 2017, Hiroshima University and Mie Fujitsu Semiconductor Limited (MIFS) announced the development of a low-power millimeter-wave amplifier that feeds on 0.5 V power supply and covers the frequency range from 80 GHz to 106 GHz. It was fabricated using MIFS’s Deeply Depleted Channel (DDC) technology. This is the first W-band (75−110 GHz) amplifier that can operate even with such a low power-supply voltage. Details of the technology were presented at the IEEE Radio Frequency Integrated Circuits Symposium (RFIC) 2017 that ran from June 4th to 6th in Honolulu, Hawaii.

The W-band covers the frequencies used by automotive radars. Sophisticated driver-assistance and selfdriving will require radars with millimeter-wave beam scanning capability that can see day and night and even in adverse weather conditions. Such a phased array will consist of up to hundreds of transmitters and receivers. Given the fact that even cars are becoming battery-operated, it is imperative that these circuits be low-power. Lowering the power-supply voltage is the most effective means of accomplishing that. However, transistor performance drops with voltage and no W-band amplifier has so far operated at as low as 0.5 V . The team of researchers successfully demonstrated a W-band amplifier at 0.5 V by bringing together MIFS’s DDC technology and design techniques developed by Hiroshima University. The DDC technology offers high-performance silicon MOS transistors even at low voltages and is currently available from MIFS as a 55-nm CMOS process. The design techniques further improve transistor and circuit performance at millimeter-wave frequencies. 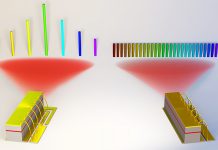