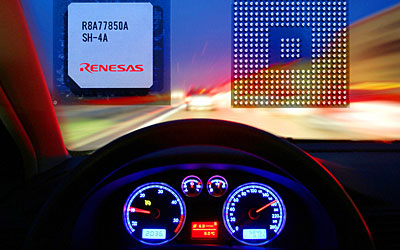 Renesas has released a 32-bit microprocessor with a 600MHz maximum operating frequency that sets a new speed record for the popular SuperH family. The device incorporates a top-end SH-4A superscalar CPU core with on-chip cache and RAM that delivers one giga instructions per second performance for fast program execution. It also has a floating-point processing unit that achieves 4.2 giga floating-point operations per second performance for speeding up the generation of 3D graphics.

Main applications for the SH7785 are car infotainment system (CIS) products and other multimedia systems that process 2D and 3D color graphics, require powerful processing, and can use the versatile display capability provided at low cost by the multifunction display unit built into the chip.

The SH7785 microprocessor offers 50 percent more speed and enhanced functions compared with the SH7780, the 400MHz device used in many CIS products now in production. The higher levels of performance and functionality of the SH7785 are necessary to handle the rapidly increasing sophistication and expanding features of the latest multimedia systems. For example, a valuable new feature for a car navigation system is one that shows an annotated 3D picture of what the driver can see through the windshield, created based on the vehicle's location and speed and direction of motion. Implementing such a feature requires considerable processing power and excellent display control -- both of which the SH7785 provides. Many other intriguing features and exciting new applications can be enabled by the new SuperH microprocessor, which saves development time and resources through upward compatibility that allows the reuse of application code written previously for other SuperH processors.

"The new SH7785 processor addresses the growing industry need for increasingly sophisticated and versatile products which can also reduce the number of system components to cut costs," said Paul Sykes of Renesas. "Besides its powerful processing speed and sophisticated multimedia functionality, the device also enables engineers to make use of previously developed software assets, which is becoming an increasingly important consideration for system developers."

The on-chip multifunction display unit can control multiple overlapping display screens and is included as an LCD panel controller. It can produce a superimposed display of up to three 800x600 pixel screens, four 800x480 pixel screens, or six 480x234 pixel screens. It allows up to about 260,000 display colors for highly expressive image and video displays. The display unit also offers other advanced control capabilities, such as transparency processing and overwriting of text information during streaming.

Because multimedia systems with fast, high-quality displays typically use external memory for a display data buffer, the SH7785 has a 300MHz, 32-bit dedicated bus. That bus can connect to high-speed DDR2-SDRAM, providing a maximum data transfer rate of 2.4 Gigabytes/second.

Besides the LCD panel controller, a variety of peripheral functions are integrated to simplify and reduce the cost of embedded multimedia systems.

A hardware data translation accelerator useful for moving-image playback provides high-speed execution of motion compensation, color data format conversion, and more. Used in combination with the display unit, it enables moving-image playback and display to be performed by the microprocessor.

The SH7785 includes an on-chip debugging function that lets engineers perform real-time debugging at up to the device's 600MHz maximum operating frequency. An E10A-USB on-chip debugging emulator is available as a development environment and a full suite of software tools is offered. In planning is an E200F full-spec emulator with enhanced debugging.

The 19x19 mm, 436-pin BGA package of the SH7785 microprocessor is about 20 percent smaller than the current SH7780 package, aiding the creation of compact embedded systems. An environment-friendly lead-free version of the BGA package is also available.