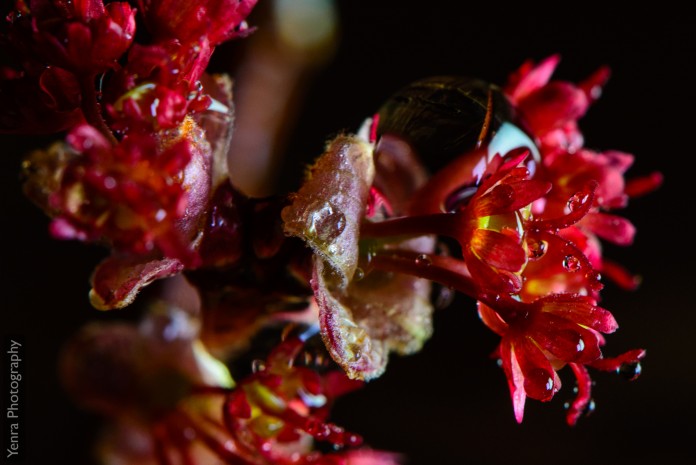 I picked up my first macro lens at the beginning of the winter, probably not the ideal season for macro photography, so I was really looking forward to the spring. I was raking in the backyard when I saw maple flowers on the ground, then looked up at the tree and saw they were up there. People have called our backyard maple a sugar maple so I think that is what these are. I used a spray bottle and a water dropper to get some water onto the blossoms. I’m practicing laying down drops of water. So in the first picture you can see a big drop of water; that’s from the dropper. All the little droplets are from the spray bottle. The second picture has just water from the eyedropper.

Maple flowers are regular, pentamerous, and borne in racemes, corymbs, or umbels.

They have four or five sepals, four or five petals about 1 – 6 mm long (absent in some species), four to ten stamens about 6 – 10 mm long, and two pistils or a pistil with two styles. The ovary is superior and has two carpels, whose wings elongate the flowers, making it easy to tell which flowers are female. Maples flower in late winter or early spring, in most species with or just after the appearance of the leaves, but in some before the trees leaf out. Maple flowers are green, yellow, orange or red. Though individually small, the effect of an entire tree in flower can be striking in several species. Some maples are an early spring source of pollen and nectar for bees.