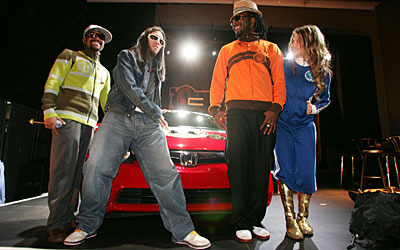 The Honda Civic Tour is introducing text-to-screen capabilities allowing personal fan messages and pictures to be displayed on big screens inside each venue.

Honda Civic is taking the concert experience to the next level by allowing fans a chance to get up close and personal with The Black Eyed Peas. Radio stations in several select markets are offering opportunities for contestants to become official Honda Civic Tour correspondents for the station. The fans will be invited to meet the band and have their picture taken as well as conduct an on-air report following the show on their local radio station. The winner's tour diary and photo with the band will be added to the Honda Civic Tour website commemorating the experience. Several magazines are offering a trip for two to the final concert in Denver.

The Black Eyed Peas customized and autographed Civic Hybrid featured in the Pump It video will be on display at each venue along the tour where an electronic kiosk will be set up for on- site registration. Fans can also enter to win the Honda Civic Hybrid.

Due to high demand, the tour is adding show dates. The Black Eyed Peas will be performing at Norfolk Scope Arena on April 19. An additional date added in the Midwest on May 3.