Hey Arnold!: The Jungle Movie will premiere as a simulcast on Nickelodeon, TeenNick and Nicktoons on Friday, November 24, from 7:00-9:00 p.m. (ET/PT). Featuring a storyline picking up where the original TV series ended in 2004, Hey Arnold!: The Jungle Movie follows the kids on an epic field trip where Arnold and his friends embark on a quest to achieve his dream of finding his missing parents.

Lane Toran (original voice of Arnold) and Jamil Walker Smith (original voice of Gerald) will supplement the returning cast by lending their voices as Che and Paulo, two members of the boat crew in San Lorenzo, and Alfred Molina (Spider-Man 2) stars as resident villain, Lasombra. 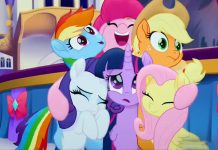 My Little Pony the Movie