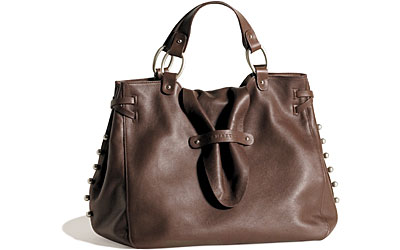 Skytech has been awarded an exclusive North American distribution of 75-year-old French luxury brand Lamarthe. Lamarthe's bold handbags including the highly sought after Exception bag that was named one of Elle France's Top Ten Must Haves for Fall 2005 are now available to American consumers for the first time.

"Never has there been a better time to introduce the elegant, chic, and urban style of the new Lamarthe line to sophisticated American women," said Lamarthe CEO Mario Gardini. Now featuring the work of savvy new French designers like Sophie Levy, Lamarthe is a top-5 brand in many European countries and has produced double-digit growth this year through its mix of traditional and modern design expressed through the finest European craftsmanship.

"American and Canadian women have been valued customers across Europe, and have constantly asked us to come closer to them," said Gardini. Top European multi-brand and department stores feature Lamarthe, including Galeries Lafayette, Printemps, and Bon Marche.

Skytech specializes in bringing fine brands to the US market. "The top priority for 2006 will be to establish Lamarthe with select retailers," said Skytech CEO Greg Beasley. "Lamarthe's line beautifully suits a myriad of tastes. I believe Lamarthe will change from a well-kept secret this Christmas, into the brand to watch next year."