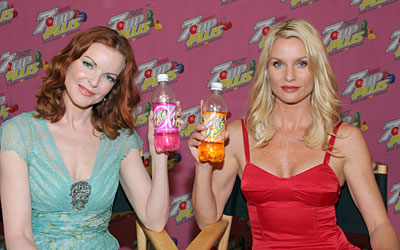 A soda that is a good source of calcium launched new Cherry and Island Fruit flavors with a new star-studded advertising campaign. With Brandon Quinn as a supermarket stock boy in tow, Desperate Housewives stars Marcia Cross and Nicollette Sheridan showed the new commercial.

A combination of 7UP and fruit juice with calcium, the beverage is now available nationwide in three flavors including the original Mixed Berry and two new flavors, Cherry and Island Fruit.

"Getting enough calcium on a daily basis is a challenge for most women," said nutritionist and author Liz Weiss. "By providing a good source of the daily calcium requirement in every serving, 7UP PLUS is providing a better choice for soda fans who are looking for great taste and more balance in their lives."

The beverage is low calorie, low sodium, caffeine free, and a good source of calcium.

The commercial shows two strong women who know what they want and will stop at nothing to get it. Marcia Cross and Nicollette Sheridan meet and compete in the grocery aisle as they take turns trying to one-up each other with the vast quantities of 7UP PLUS they can load into their carts.

The spot ends with a humorous twist when Cross walks away the victor after topping off her cart with the 7UP PLUS stock boy, using her superior strength.

"It was a major victory to walk away with the stock boy, but I've let Nicollette know that I'm willing to share - the stock boy and my 7UP PLUS, that is," said Marcia Cross.

"7UP PLUS is committed to putting fun and yum into calcium with our delicious new soft drinks," said Randy Gier of Cadbury Schweppes. "Our lighthearted TV ad featuring Marcia Cross and Nicollette Sheridan demonstrates how strong women everywhere can't get enough 7UP PLUS."

"Women have responded that 7UP PLUS is exactly the type of soda they've been looking for," added Gier. "Offering three 7UP PLUS flavors will provide women with even more variety."

The new ads were created by Y&R San Francisco and will run on national television beginning on August 29. Aimed primarily at women ages 25-49, the campaign also includes radio and print advertising that will begin in September in major women's publications.

7UP is a brand of Mondelēz International.