Announced November 8, 2017, a team of researchers led by Dartmouth College have demonstrated an inexpensive way of improving wireless signal strength for indoor spaces with multiple rooms. The same technology for enhancing office and home Wi-Fi signals can also be used to strengthen wireless security, denying unwanted area signal strength while boosting it where it is wanted. The Custom Wi-Fi Antenna Reflector relies on 3-D printing to produce a cheap, customized reflector that directs wireless signals to where users need them most.

Customizing the coverage of wireless networks inside buildings is critical for users to improve signal reception in desired areas while weakening signals in others. By shaping signals, users can increase wireless efficiency through lessening the signal-deadening impact of building materials and interior layouts.

Such a system can also make it more difficult for attackers by adding to existing security measures like encryption through physically confining wireless signals to limited spaces. This also leads to reduced interference.

Achieving the goal of improved wireless performance is particularly challenging indoors because of the complex interactions of radio signals with the environment. Existing approaches to optimizing wireless signals rely on directional antennae to concentrate signals, but this equipment is either difficult to configure or beset by high cost.

Through experiments presented in the research paper, the team improves upon previous studies that placed an aluminum soft-drink can behind a Wi-Fi access point to strengthen signal in one direction. The current research into a Custom Wi-Fi Antenna Reflector generalizes this idea by presenting a systematic approach to optimizing reflector shapes for enabling a more developed set of signal distributions.

After assessing interior layouts and the target areas to strengthen or weaken signal strength, the Dartmouth research team placed a computationally optimized signal reflector around a wireless router. The reflector, composed only of plastic and a thin layer of metal, redirects wireless signals to the desired coverage areas.

After testing the approach in two different interiors for signal strength and speed, the researchers reported that optimized 3-D reflectors provide numerous benefits including: strong physical security, low cost, and ease of use for non-expert users. The researchers tested the reflector with a variety of off-the-shelf Wi-Fi access points, including those using the latest Wi-Fi protocol 802.11ac.

To create the technology, the research designed an algorithm that optimizes a reflector’s 3-D shape to target wireless coverage. The team also developed an approach to simulating how radio signals spread and interact with objects in their environment.

With information on a specific interior space, locations of wireless access points and the desired target area, the system computes an optimized reflector shape in only 23 minutes. Researchers found that the reflectors can decrease strength by up to 10 dB where the signal is not wanted and increase strength by 6 dB where it is desired. The reflector is also relatively easy to place.

Because the current design is limited by its static shape, the research team will now study reflectors made of different materials so that the device can automatically adapt its shape when the interior layout changes. The team will also examine higher frequency bands such as millimeter waves and visible light.

The Custom Wi-Fi Antenna Reflector research is a joint effort by researchers from Dartmouth College, University of Washington, Columbia University, and UC Irvine. The research was presented on November 8, at ACM’s BuildSys 2017 in Delft, Netherlands, 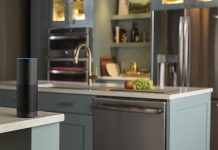