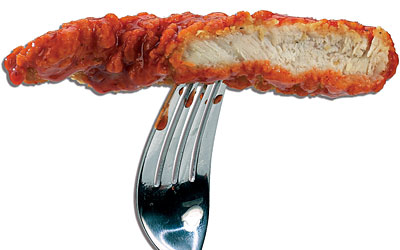 Wingstop is adding the first new product to their menu since the restaurant's inception: 100 percent all-white meat boneless chicken wings. The boneless wings began rolling out nationally November 2005 and will be available in Wingstop's locations in 26 states by early 2006.

Wingstop selected the new boneless wings, which feature Wingstop's own proprietary batter and breading recipe along with marinated breast meat, after extensive research into the consumer market for chicken products.

Chicken wings, Wingstop's menu staple since 1994, held an 11 percent share of restaurant chicken servings in 2003 according to statistics from NPD Foodworld, CREST 2004. By adding the boneless chicken wings (strips), they add an additional 33 percent share of the servings to their offerings, giving them the opportunity for involvement in 44 percent of the market for restaurant chicken sales.

"Boneless wings are a natural product extension for us," said Wingstop CEO James Flynn. "It keeps us core to our focused wing concept, but also opens up a new customer base."

The National Chicken Council projects that domestic chicken sales will be an estimated $50.4 billion in 2005, increasing $18.9 billion since 1995. Following a successful test launch in Houston and the fact that from November 2003 to November 2004, chicken strip sales at fast food restaurants rose by a significant 12.5 percent, Wingstop has decided to provide the product in their restaurants across the nation.