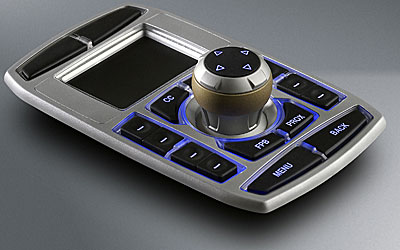 A study by Preh demonstrates ways to improve the human-machine interface (HMI) by reducing the number of driver controls for system functions in the vehicle interior space.

In explaining the concept study, Preh's Dr. Michael Roesnick said, "Although control systems will continue to become more complex, our HMI study has shown that user-friendliness is still possible, and that there are a number of ways to prevent drivers from being distracted and to increase their concentration."

The study notes that centrally located controls for pushing, rotating, and tilting can be configured for individual functions. End points can be defined, preventing going past the available choice of settings, with drivers receiving cues from not only visual signaling, but also by touch feedback when choosing functions.

Similar advantages can be reached by the automatic locking of tilt positions with the chosen function, thus eliminating undesirable motions. Drivers will be guided towards a more intuitive handling of central control elements, with only the necessary operational paths at their command, allowing them to focus on road and traffic conditions.

A second phase of the study investigates the technology of freely programmable buttons, a concept developed by Preh that facilitates the multiple assignment of functions to an array of buttons. Initially, the array of buttons is blank without icons.

By selecting a marked function button -- seat adjustment, for example -- the other blank buttons will be activated and show the appropriate icons. Now the buttons can be pressed as usual.

By selecting another function -- air conditioning, this time -- the corresponding icons will be produced on the buttons' surface. Accordingly, it is possible to keep buttons, with their advantage of simple and intuitive control characteristics, as primary control elements while their number in the vehicle interior can be reduced.

Preh's technology is based on a special projection technique using an LCD. Preh is the first supplier to have completed the technology of freely programmable buttons for industrial production.

A touch pad was also included in the HMI concept study. Preh has used the device to facilitate the operation of navigation systems, where destinations can be simply chosen on screen maps by means of a touch pad. If symbol-recognition software is provided, the destination can be written with a finger.

The HMI study has investigated approach-sensitive buttons, which facilitate choosing an individual function by displaying it visibly on the central screen as a finger approaches.