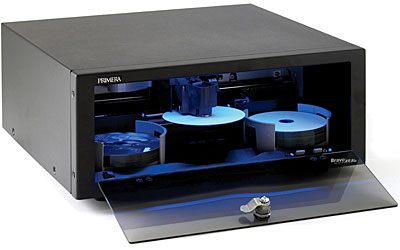 The initial release of the Bravo XR-Blu utilizes single-layer discs to store up to 25 gigabytes of data. An upgrade will be available shortly after launch that will allow dual-layer media, which stores up to 50 gigabytes of data per disc. Since up to 50 discs can be loaded into the Bravo XR-Blu at a time, this gives a total native capacity of up to 2.5 terabytes of data that can be published in a single session. Blu-ray discs utilize shorter wavelength blue lasers in order to store far more data than any other optical disc technology commercially available.

As the first automated system to use Blu-ray technology, the Bravo XR-Blu is expected to be used in applications in business, government, military, medical, banking, insurance, back-up and archival, high-definition video, and digital movie post production.

A built-in blue LED array that illuminates the interior, making it simple to view operation. All supplies replenishment is accomplished from the front panel, allowing the unit to be placed almost anywhere -- on a desk, a shelf or on a countertop.