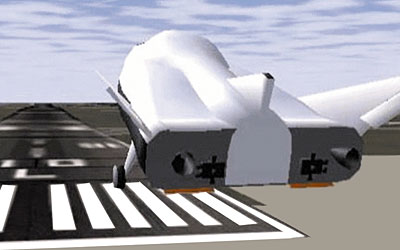 The Aerospace Blockset 2 from MathWorks builds on the foundation of Simulink and Model-Based Design for aerospace vehicle modeling, simulation, and visualization. New features bring high-quality flight simulation graphics to the desktop, where modeling and simulation is more accessible and economical than design and test conducted in a lab. The new version provides off-the-shelf, drag-and-drop representations of aerospace components using standards-based reference models. Engineers can use the Aerospace Blockset 2 to optimize vehicle subsystem configurations and rapidly perform subsequent tradeoff studies earlier in the design stage.

"The Aerospace Blockset has desktop visualization capabilities that provide the ability to quickly analyze the response of an aerospace system, not only from a pilot's perspective, but also from a chase aircraft or ground observer," said Langley engineer Kevin Cunningham. "The ability to present visual animations is particularly beneficial when complex multi-axis dynamic maneuvers are being evaluated. Now, non-subject matter experts are able to comprehend the results more effectively."

"We are pleased to be providing the aerospace engineering community with a product that not only bridges the gap between modeling, simulation and flight simulation graphics software, but also helps meet the growing demand for designing low-cost, high-endurance aerospace vehicles," said Jennifer Petrosky of MathWorks. "Now, engineers can save time and money by using desktop modeling and simulation capabilities rather than relying on costly lab-conducted design and testing methods."

The Aerospace Blockset 2 is available for Microsoft Windows, UNIX/Linux, and Macintosh platforms.